Kentfield came out of the starting gate strong with Ashton Wolf putting two goals on the board in the first chukka to take a 2-0 lead.  Deer Creek came out in the second period of play,  looking to climb back into the game. Jessica Bailey-Manno struck first to lessen the gap to one goal, but Eric Hammon replied with a goal of his own to regain his Kentfield squad’s lead of two goals going into halftime.  What Kentfield was doing seemed to be working and they kept their noses to the grindstone in the third chukka of play with Elliot King, Hammon and Wolf each scoring single goals.  Deer Creek continued to battle with Bailey-Manno and Caroline Anier scoring goals of their own in the second as well.  Going into the fourth chukka Kentfield was leading Deer Creek by a score of 6-3.5 (Deer Creek having 0.5 of a goal on handicap).  Deer Creek continued to scrap their way through this game with Gina Padilla and Anier scoring and by limiting Kentfield to a single goal by King.  Unfortunately for Deer Creek the clock ran out on their comeback attempt and they fell to the Kentfield squad by a final score of 7-5.5. 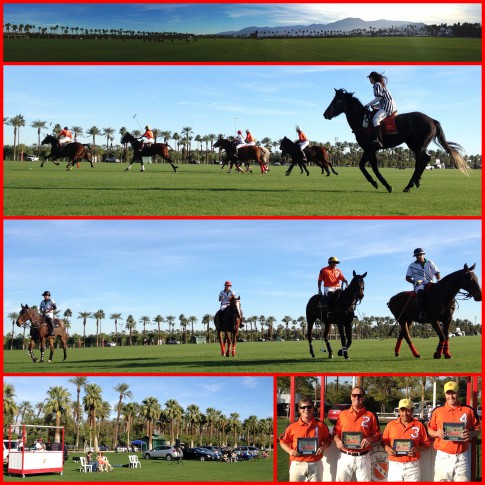 The Coyote Classic 1-Goal tournament final was between La Conner: Jan Flanagan/Allecia Russo; George Dill; Shaun Flanagan; Ernie Darquea and Barbados: Shane Flock; Doug Schneider; Ted Okie; Jared Sheldon.  Barbados gave a goal on handicap to the La Connor squad and not much else, they came out strong and finished strong.  Shane Flock and Jared Sheldon each scored three goals for the Barbados side which took the championship with a final score of 7-4.