In honor of Patton’s military accomplishments and to celebrate his love of horses and the sport of Polo, Empire Polo Club dedicated and named it’s main Sunday Polo Field the “The General Patton Field.”   A new flagpole and plaque honoring General Patton was unveiled during the ceremony.

Patton once commented “The virtue of polo as a military accomplishment rests on the following: it makes a man think fast while excited; it reduces his natural respect for his own safety, that is – it makes him bold; it teaches restraint under exciting circumstances… nearest to mounted combat; makes riding worthwhile; keeps a man hard and teaches better horse management.”

Sylvester Stallone and Helen Patton, granddaughter of General George S. Patton, Jr. and Honorary Chair of the General Patton Museum, were the guest speakers at the ceremony.

Most Valuable Player was awarded to Ignacio Detour. 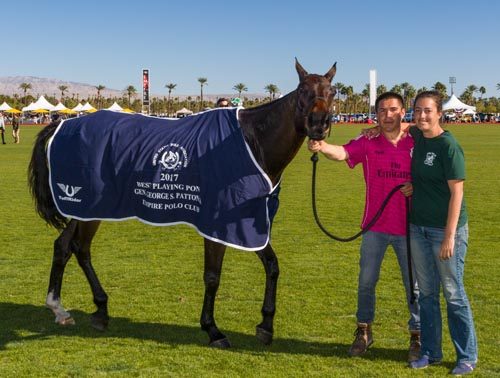 Photos by Jim Bremner. Click here to view his gallery.