The polo world is preparing to salute their champions for their incredible contributions to the sport.

The 34th Annual Hall of Fame Awards Dinner and Induction Ceremony is one of the premier social events of the high-goal polo season in Florida and is scheduled for Friday, February 17, at 6:30 p.m. at the Museum of Polo.

Honoring the present and the past, this year’s inductees into the Museum’s Polo Hall of Fame are Jeff Hall, Aidan Roark, Alexander Haagen, III, Tom Hughes, and legendary horses Hale Bopp, owned by Adam Snow and Stephen “Laddie” Sanford’s None So Pretty.  (Click here to see more details and photos of the inductees)

The elegant, black-tie affair is the Museum’s largest fundraiser, thanks to the generosity of the night’s various benefactors. A limited number of reservations remain available for the gala.

“We are grateful to have the tremendous patronage of our sponsors, whose dedication and generous support has allowed the Museum to improve and flourish,” said George DuPont, Executive Director of the Museum of Polo and Hall of Fame. “Their continued commitment makes them true, unsung champions.”

One of the major components of the event, the dinner celebration, has been graciously underwritten by Melissa and Marc Ganzi, who have been reception sponsors since 2008, and the Grand Champions Polo Club. These sponsors play a significant role in the evening’s activities by underwriting the dinner and making it the fundraising success that it is.

A crucial part of the event’s success is due to the substantial support of Premier Table Sponsors Olexa Celine and the Robert I. Goldman Foundation, Ambassador Glen Holden and U.S. Polo Assn., all of whom participated in last year’s successful gala.

The festivities move along nicely because of the various significant Wine and Spirit Sponsors, thanks to the combined efforts of Robert S. Lipman, Margaret Lipman Orthwein, Lipman Brothers, LLC, Brown-Forman, Tito’s Handmade Vodka, Bacardi USA, Old Hickory Bourbon, Korbel Champagne, Rabble Wine Company and Harken Chardonnay. Guests will be treated to a wide variety of drink and creative cocktails thanks to their considerable participation in the evening.

Attending individuals will leave the event with a PoloArt gift book by Melinda Brewer, thanks to Maureen Brennan’s Iconica Foundation, and Steve Cox, each of whom contributed to the creation of the attractive commemorative book.

The Museum of Polo and Hall of Fame would like to further extend its gratitude to the photography, exhibit, and social media sponsors — Alex Pacheco, Krystal Monahan/Krystal Zaskey Photography, Chukker TV, and Melinda Brewer, for providing guests with reminders of the historical evening.

The Museum of Polo and Hall of Fame is dedicated to fostering an appreciation of the sport and its history as well as honoring those who have made outstanding contributions to the sport. The inaugural Polo Hall of Fame class was inducted in 1990 and comprised of Thomas Hitchcock, Jr., Stewart Iglehart, Devereux Milburn, Robert Skene, Cecil Smith, and Harry Payne Whitney.

It is with great sadness and heavy hearts that we inform you of the death of our colleague and friend Robert del Mas, who passed away on October 6th, 2022.

Robert was the General Manager and Director of Sales for Empire Polo Club where he had been employed for the past 22 years.  In addition to his position at Empire Polo Club, Robert served on the Board of Directors for Visit Greater Palm Springs and the Coachella Valley Economic Partnership.  He was a member of the Eastern Coachella Valley Business Alliance and the 4th District Supervisor V. Manuel Perez’s Development, Housing & Economy Blue-Ribbon Committee.

A loyal, quiet and caring soul, Robert was a cherished member of the Empire Polo Club Family and he will be deeply missed.

The Board of Directors of the Museum of Polo and Hall of Fame has announced the Class of 2023, their next inductees into the Museum’s Polo Hall of Fame: Jeff Hall, Aidan Roark, Alex Haagen III, Tom Hughes, and legendary horses Hale Bopp and None So Pretty.

The 34th Annual Hall of Fame Awards Dinner and Induction Ceremony is one of the premier events of the high-goal polo season in Florida and is scheduled for Friday, February 17, 2023 at the Museum of Polo.

Jeff Hall is one of the most accomplished U.S. players in recent history, having won virtually every major U.S. tournament and reaching an 8-goal handicap. He is a 10-time winner and record-holder for most wins of the USPA Silver Cup, his first in 1997 and his 10th in 2022. He won the 2003 U.S. Open with C-Spear and his pony, Harrah, won Best Playing Pony award, and reached the U.S. Open final in 2006 and 2002, both with Orchard Hill. Hall also won the 2020 USPA Gold Cup with La Indiana and has raised the trophy for the 20-goal Ylvisaker Cup four times and the Pacific Coast Open twice as well as numerous other high-goal tournaments. Hall represented the U.S. as a member of the 2009 and 2018 Westchester Cup teams and the 1998 14-Goal World Championship. Also, Hall is one of the few American players to have participated in the Argentine Open.

Posthumous Hall of Fame honoree Aidan Roark had a celebrated career both in the United States and internationally during the Golden Age of Polo prior to World War II. The Irish-born Roark was a solid fixture in California, mainly at the Riviera Polo Club in Los Angeles, establishing himself as a mainstay on the American polo scene. He was considered to be a true pioneer for polo on the West Coast for decades. Representing his adopted home, Roark was a key part of the winning team from the “upstart” West in the fabled 1933 East-West series, and again in 1934. He then represented Great Britain in the prestigious 1939 Westchester Cup at Meadow Brook. Later in 1949, Roark was chosen to represent the U.S. in the International Match against Argentina. A veteran of the most important tournaments and venues across America, Roark retired from polo in 1954. He passed away in 1984.

Alex Haagen III is honored with the Iglehart Award for outstanding contributions to the sport. Haagen focused his efforts on growing polo on the West Coast in Indio, California, both on and off the field. He started Empire Polo club in 1987 and built the 11-field club into a juggernaut that hosted the first 40-goal event in the U.S, the first U.S. Women’s Open, the Townsend Cup, and the Arena Open tournament. The busy club featured at least 15 teams playing every winter, along with a polo school and Sunday polo with robust attendance. Haagen III, who started playing polo in 1983, was patron of the Empire polo team for 30 years.

The posthumous Iglehart honor is awarded to Tom Hughes, whose long and illustrious career lasted some 55 years. The well-respected Hughes was an early proponent of professional umpires and diligently worked to improve the quality of umpiring. Hughes worked tirelessly with the USPA, club officials and committees to move toward the creation of the professional polo umpire system currently in place. Hughes umpired many high-goal matches in the United States and England and also managed several clubs.

As a successful player who held a 4-goal handicap outdoors, Hughes won numerous tournaments, including the inaugural USPA Gold Cup in 1974 with Milwaukee, the Silver Cup in 1974 as well as its predecessor the Twenty Goal four times in a five-year span along with the 1970 America Cup and the Butler National Handicap in 1973 and 1975. Hughes passed away in 2016.

The Horses to Remember honoree of the early pre-Hartman era is None So Pretty, an Argentine-bred, chestnut mare owned and played by Hall of Famer and former 7-goaler Stephen “Laddie” Sanford. None So Pretty was brought to the U.S. from Argentina by Lewis Lacey and purchased by Sanford in 1925 for $10,500, a record price of the era. Sanford went on to win the U.S. Open in 1926, 1929 and 1930 with None So Pretty an important weapon in his string.

In 1929, None So Pretty captured top honors in the prestigious Polo Pony Society Show at Meadow Brook whose criteria states that the pony must excel both on the field and as an example of worthiness to improve the breed.

The phenomenal black thoroughbred mare Hale Bopp, owned and played by Hall of Famer Adam Snow, will be recognized as “Horses to Remember, post-Hartman Award Era”.  Hale Bopp possessed amazing physical talents of speed and turning ability that were only topped by her assertiveness and heart.

“This is a horse so good she probably single-handedly changed my career,” said Snow, the former 10-goaler. “She had the heart to outrun, out-turn and out-push her opponents.”

The relatively small (15 hands) Hale Bopp started playing high-goal polo in 1998 as a six-year-old and had an 11-year career of playing in all the major high-goal tournaments, including the U.S. Open and the 40-Goal Outback Challenge matches without missing a game.

The Awards Gala and Induction Ceremony will take place at the Museum of Polo on Friday, February 17, 2023. All are invited to attend. Reservations are $250 each (tax deductible portion $125). The Hall of Fame Awards Dinner is the most important annual fundraising event for the Museum, a 501(c)(3), not-for-profit organization. Contact Brenda Lynn at the Museum of Polo, (561) 969-3210 or (561) 969-7015, e-mail: polomuseum@att.net for further details, information, or to make your reservations.

REMINDER:  If you plan to attend the games on Sunday, please check for road closures due to the Ironman event that takes place on the same date, Dec. 5th.  Here is a link to a map of road closures.

Today is the finals of the U.S. Open Arena Polo Championship, hosted by California Polo Club.  Dallas Polo will take on Boom! Cult as they compete for $50,000.

Games are open to the public and admission is FREE.  Parking entrance located near the corner of Ave. 52 and Jackson St.

See the attached flyer for teams and event details. 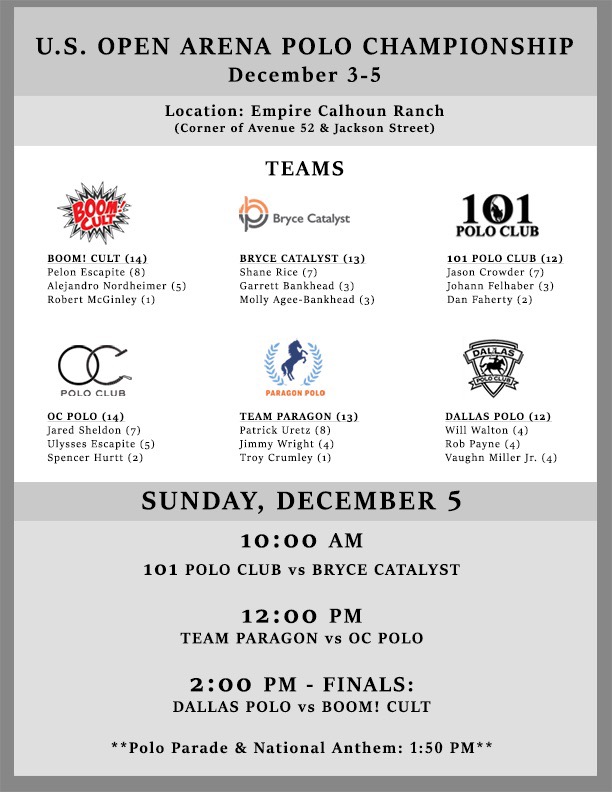 U.S. Open Arena Polo Championship is this weekend! The teams will compete for $50,000.

The games are open to the public and admission is FREE.

The finals is scheduled for Sunday, December 5th at 2 PM.

The tournament is being held at Empire Calhoun Ranch on Ave. 52 & Jackson St. See the attached flyers for teams and tournament details.

REMINDER:  If you plan to attend the games on Sunday, please check for road closures due to the Ironman event that takes place on the same date, Dec. 5th.  Here is a link to a map of road closures. 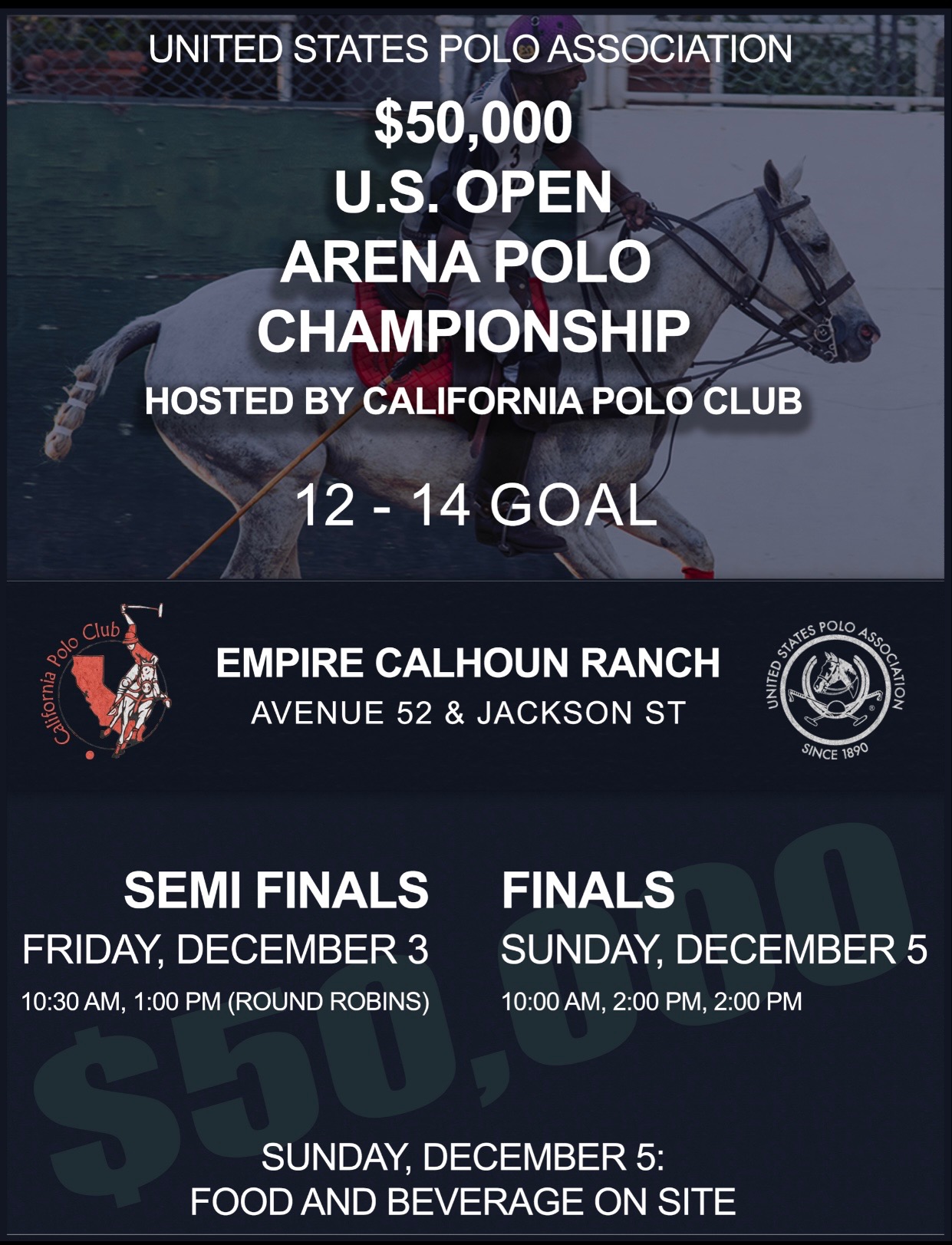 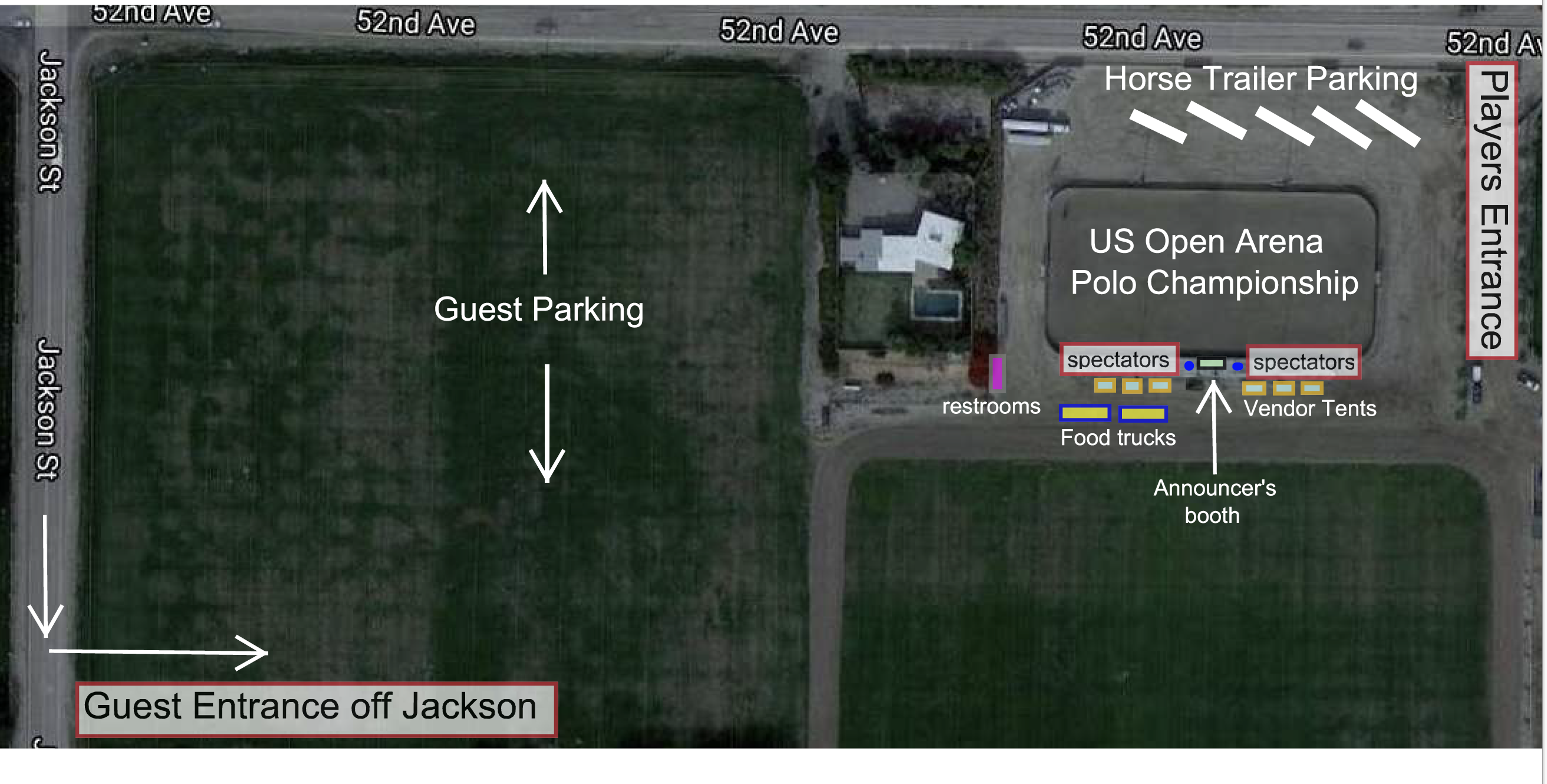 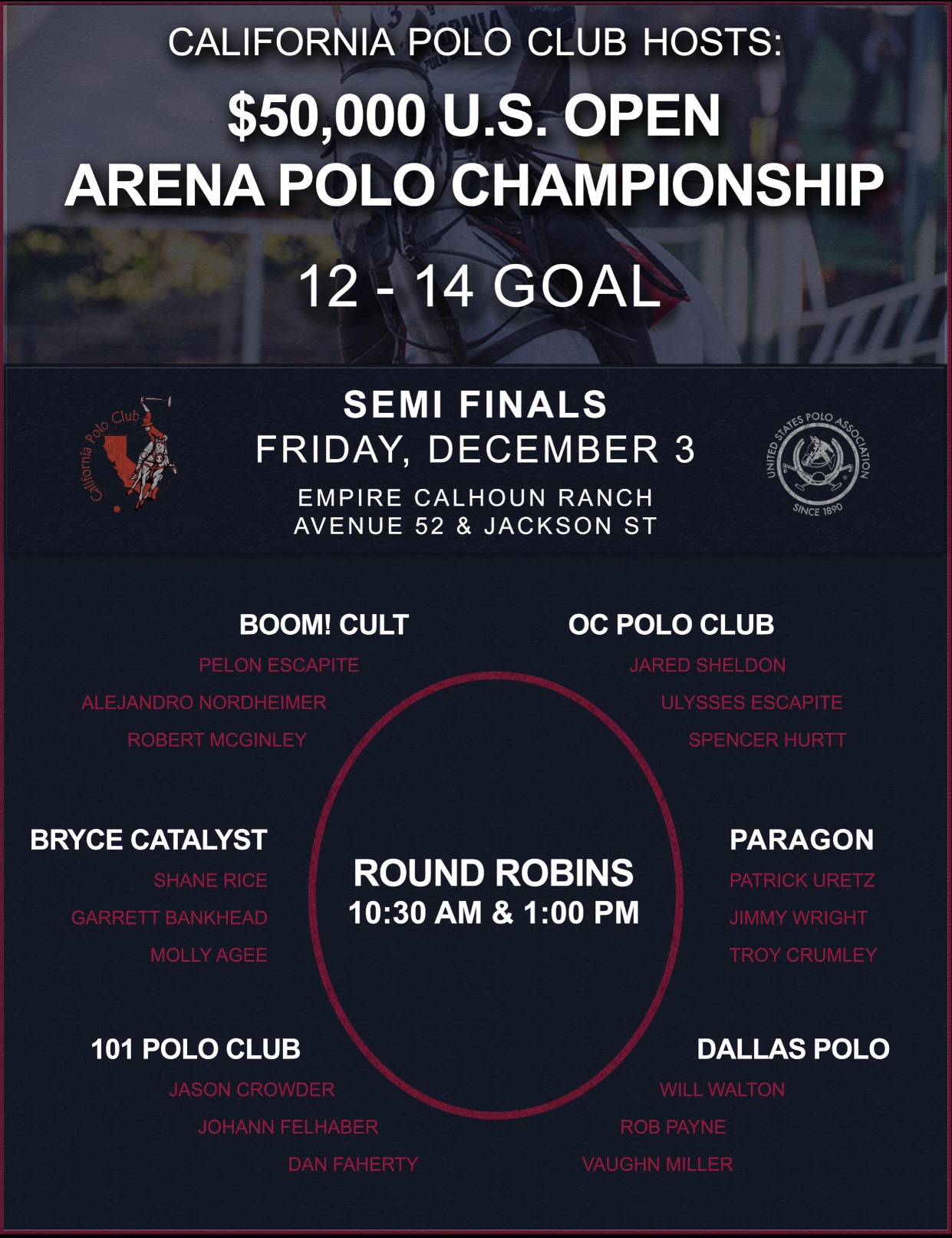