The Empire Polo & Wine Festival has changed its format and will couple it’s wine tasting with a “Day on the Lawn” featuring live music, croquet and bocce ball.

More than a dozen wineries will pour samples of hand-crafted wine produced in Temecula Valley. Wine tasters will enjoy live jazz and acoustic music as they meander through the lawn area tasting wine and enjoying the ornate fountains, elegant sculptures and tropical gardens.

When wine is paired with world-class polo a perfect balance is achieved … a blend of sophistication, flavor and excitement.

Festival will feature 12 to 15 wineries that will pour samples of wine produced in Temecula Valley. The wine tasting is coupled with music and a traditional day of Sunday Polo featuring two polo games and a halftime champagne divot stomp.

Wine Tasting Tickets are $30 per person at the gate or $25 with advance purchase online. This fee includes wine tasting and a souvenir wine glass. Tickets can be purchased at the gate or online at www.EmpirePolo.com. For VIP seating or groups contact Empire Polo Club for details at Tel. 760-393-7298 or email tonyschieffer@empirepolo.com.

General Admission to the polo games is FREE. Bleacher seating and tailgating is available on the east side of the polo field and is open to the public.

Food and beverage service is available for purchase on site. Participants must be 21 years of age to taste wine.  Click here to download the Empire Polo & Wine Flier. 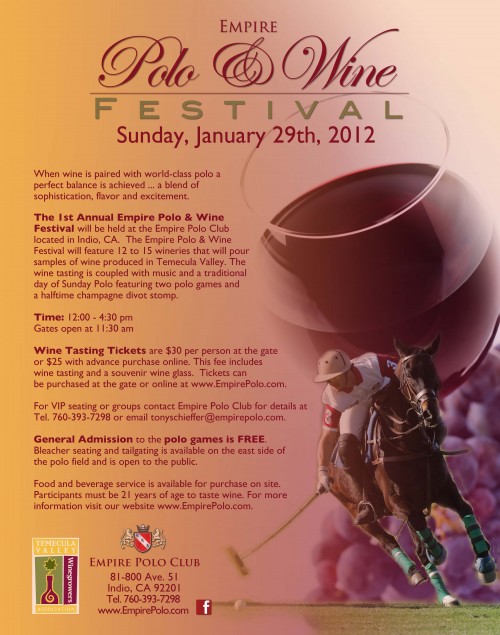 Indio, CA:  Opening weekend kicks-off with “Polo Under The Lights & Happy Hour” on Friday, January 6th, 2012 at 6:00 PM.  Two teams will compete in a competitive polo match at Empire Polo Club.  General admission is free and everyone is welcome. The Friday night “Polo Under The Lights Games” will continue every week during the season.  A cash bar will be available on site during the Friday night games.

Opening Day of the 2012 polo season at Empire Polo Club is scheduled for Sunday, January 8th, 2012.  Sunday Polo features two polo games at 12 and 2 PM.   A complimentary Champagne Divot Stomp sponsored by Wilson Creek will be held at halftime during the 2 PM game.   Opening Day is also Hat Day!  Help us celebrate this annual tradition by wearing a hat to the polo games that day.

General admission seating is FREE and includes bleacher seats and field-side tailgate spots on the east side of the field.  Tables are available for groups with a reservation.  Cabanas & VIP seats are available for an additional charge. Reservations for these areas are highly recommended. Food and beverage service is available on site during the matches. The polo games are held at Empire Polo Club located at 81-800 Ave. 51, Indio, CA  92201.

Polo & Wine Festival, Sunday, January 29th, 2012 –  Empire Polo Club is pleased to announce the 1st Annual Polo & Wine Festival that will be held during Sunday Polo on January, 29th.  General admission to the wine tasting is $30 at the gate or $25 with advance purchase of tickets online.   Attendees can taste wine hand crafted by approximately 12-15 Temecula Valley Wineries.  During the Festival there will be 2 featured polo games that will be open to the public and general admission to the polo games is free.   For more information visit www.EmpirePolo.com.  To buy Empire Polo & Wine Festival tickets online visit http://www.ticketfly.com/event/70279.

WCT Debii $$ Conant Memorial Women’s Tournament, Sunday, March 4th, 2012.  The ladies will take the main Sunday Polo Field for both the 12 and 2 pm games.  Women’s Championship Tournaments (WCT) is an International league organized by Sunny Hale, the highest rated female polo player in the world.  Women from the western United States, Canada and other parts of the world will travel to Indio, CA to compete in this prestigious event.  The polo games are open to the public and general admission is FREE. For more information visit www.EmpirePolo.com.

WCT Women’s Arena Finals, March 23-25th 2012 (time TBD) – Empire Polo Club is pleased to host the 1st Annual WCT Women’s Arena Finals that will be played in the Empire Polo Stadium.  Women from all over the country will travel to the desert to participate in this national event.  Sunny Hale, the highest rated player in the world, will be in attendance at this event and she may also participate on one of the teams.

Empire Champions’ Cup Finals – Sunday, April 1st, 2012 at 2:00 PM – Join us for the grand finale tournament & closing day of the polo season.   There will be more than $70,000 in cash & prizes awarded to the teams who are in the final round of the Champions’ 8-10 Goals Finals and the Lions’ Cup 4-Goal Finals.

What to wear?  This is one of the most asked questions by spectators.  We suggest “hats and flats” as heels sink in the grass and the sun is always shining here in the desert.  Polo is a casual affair at Empire Polo Club, so please wear whatever you feel comfortable in. You will see spectators wearing everything from shorts, jeans and flip-flops to sun-dresses, khakis and button down shirts. 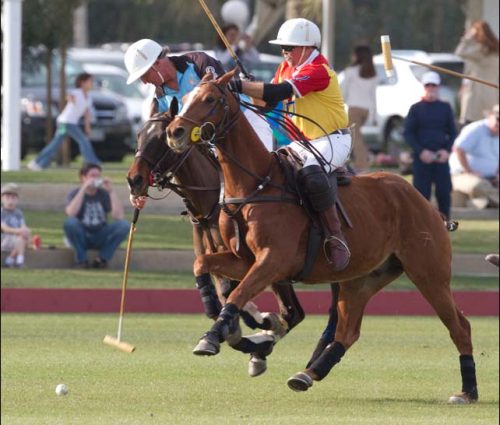 What better way to spend your Sunday afternoon? Imagine sitting field-side, overlooking a series of immaculate polo fields surrounded by the majestic mountains in the distance while watching one of the fastest team sports on earth. You can take a date, your spouse, your family or a group of friends and enjoy a day outdoors while watching the polo ponies thunder along the field.

Polo is never boring when you have eight players traveling at speeds up to 30 miles-per- hour while riding-off other players, hooking their opponent’s mallets and hitting the ball at full speed. It is a great way to spend your day and general admission is FREE. You can’t beat that!

Established in 1987, Empire Polo Club is one of the largest polo clubs on the west coast with 9 polo fields and an indoor arena and polo school.

Empire Polo Club is a world-class, international polo club. Players from Canada, Mexico, Argentina, Malaysia, The Philippines, South Africa, France, Germany, England and other countries flock to the desert to play polo at Empire Polo Club. Player’s ages range from the young up-and-comers, who are in their early teens to seniors in their 60s.