You are here: Home / Archives for Tournaments 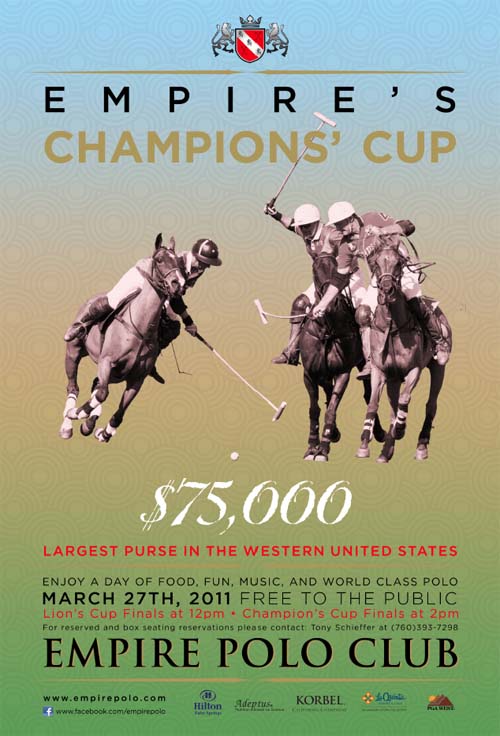 Plus Trophies & Other Gifts

8-10 Goal Tournament
Entrance Fee: $5,000 Per Team
Fees are put into a purse that is distributed to the top 4 teams as outlined below. Empire Polo Club & Twin Palms Polo Club will match funds in the purse. There is an 8-Team Cap on this tournament.

4-Goal Tournament
Entrance Fee: $1000.
Entrance fees are put into a purse that is distributed to the top 2 teams as outlined below. Empire Polo Club will match funds in the purse. There is an 8-Team Cap on
this tournament.

If your team is not currently a member of Empire Polo Club or Twin Palms Polo Club, membership dues will be pro-rated for the tournament. Contact the polo office for details Tel. 760-342-7755.

Indio, CA: For the first time in the history of polo in the desert, there will be a 22-Goal Arena Polo Tournament right here at Empire Polo Club.  The United States Polo Association (USPA) has awarded the USPA Townsend Cup to Empire Polo Club.  This is the first time this prestigious event will be held on the west coast and it is also the highest level of polo currently played on the west coast.  If you were to compare polo to golf, the Townsend Cup would be PGA Tour level polo.  Empire Polo Club and the local polo community are very excited to be awarded this tournament and to host such an historic event.

The USPA Townsend Cup is an arena challenge game traditionally played between teams from the U.S. and England.  The game will be handicapped at 22-goal polo, which means that all of the players handicaps on one team, when combined, equal 22 goals or less.  The higher the handicap, the higher the skill level is of the players and their team.   The highest level being played this winter on the grass is 8-10 Goal Polo.  A 22-Goal Arena game is a rare opportunity and one that you won’t want to miss.

Professional polo players are flying in from England and various parts of the U.S. to compete in this 1-day event.   Shane Rice, originally from Poway, CA, is rated 7 goals.  Joining Rice are two players from Wellington, FL, John Gobin, (6 goals) and Tommy Biddle (9 goals). Biddle is the Team Captain. Billy Sheldon, from Poway, CA, is the coach and alternate player for the U.S. Team. Sheldon is rated 7 goals.

Food and Beverage concessions on site

From I-10 take the Monroe St. exit and head south on Monroe St.  The club entrance is off of Monroe St. at Ave. 51.  Follow the parking signs.

In arena polo there are only three players on a team and in grass polo there are four.  The game is played in an arena, approximately 300 feet long by 150 feet wide, with walls all around.  The playing surface is dirt. The chukkers (periods of play) are 7.5 minutes long and there are four periods in an arena game.  The teams switch directions after each period of play.

What to wear? This is one of the most asked questions by spectators.  Polo is a casual affair at Empire Polo Club, so please wear whatever you feel comfortable in. You will see spectators wearing everything from shorts, jeans and flip-flops to sundresses, khakis and button down shirts.  For more information about “How To Dress For Polo” visit our website at www.empirepolo.com.

The Townsend Cup has been referred to as “The World Series” of arena polo and it represents the highest-level of international arena polo in a competitive format.  The Hurlingham Polo Association is bringing the English Team to Indio, CA to compete against the United States Polo Association’s U.S. Team.

Empire Polo Club is honored to host the USPA Townsend Cup on March 26th, 2011 and to be part of such an historic event.  To continue the promotion and growth of arena polo here in the desert and in the United States, Empire Polo Club invites the public to join us in welcoming England to our county and to show support both teams as they compete for the title.

Established in 1987, Empire Polo Club is one of the largest polo clubs on the west coast with 7 polo fields and an indoor arena and a polo school. Polo is played Wednesday through Sunday, November through March 27th, 2011 with featured matches on Friday evenings and Sunday afternoons.