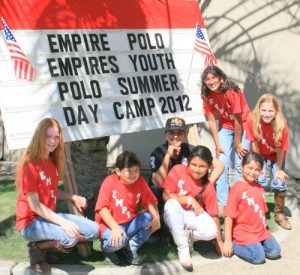 In early July, six young polo players drove into Empire Polo Club to be welcomed to Empire’s first Summer Day Camp Program. The program was developed to promote the sport of polo to local residents and junior riders. The camp was hosted by Empire Polo Club. They provided a 12- stall barn, tack room, arena and grass playing fields, plus a continuous supply of ice and cold water for our players, parents and instructors. The barn was uniquely decorated with Independence Day American flags in recognition of the holiday weekend.

Each player was assigned a stall, a polo horse, polo tack and mallet. Hanging on the stall doors were brightly colored grain buckets containing a variety of grooming supplies to be used by the players for the purpose of taking care of their horses. The only condition to keeping their supplies was if any tools were discovered left abandoned at any time, the owner would have to buy it back before it was returned. The group of 6 to 12 year olds did an excellent job keeping their horse equipment together for the duration of the camp. Not one child had to buy back anything. However, a passing observation of their previous behavior in their daily lives might reflect a different story. Myself and their parents were quite impressed by their due diligence.

The Summer Camp schedule consisted of six sessions starting with Thursday evening and ending Sunday morning with a tournament game on Empire’s Rose Garden Field. Due to the daytime thermometer’s triple digit heat, evening sessions ran from 6 PM to 9PM and the morning sessions from 7 to 11 AM. The children would break for the afternoon and return to the club in the evening. The total cost per player was $300.00 with snacks and drinks provided. 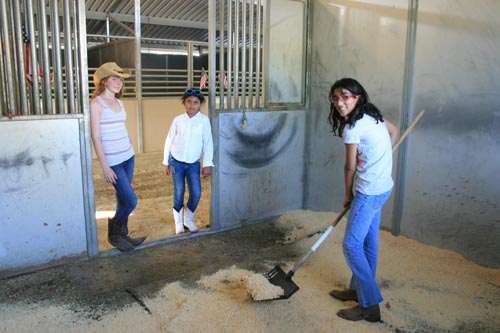 The beginning session focused on how to properly bed down a horse and stall preparation in a polo barn. Players learned how to spread shavings, place water and grain buckets, how to handle a manure pitchfork and wheel barrel. Those of us who spend a lot of time working with horses can be quite surprised at how important the simplest information might register with a novice horse person. The first night a water bucket was used to deposit horse droppings in one of the player’s stalls. When I asked my young player where her horse’s water was, I got a look of bewilderment. The lesson for her that evening was horses need water. The lesson to the director was to double check everything and don’t take anything for granted.

Our first session focused on grooming techniques for a polo horse. Primo, Al Haagen’s polo groom, demonstrated to the players how to properly bathe a horse, clean out the hooves of the horse and roach the mane and tails of the horses. Each player then proceeded to use Primo’s techniques on their own horses. When the evening ended we tried to judge who had the prettiest polo pony, but they all looked equally good.

Friday’s lessons focused on tack maintenance and identifying and naming polo bits and bridle parts. They learned to wrap a horse’s legs with polo wraps and to tie their horse’s tail. They made bets during the practice game on who‘s tail will stay up the longest. The evening culminated in a “Groom’s Race” between the two teams. There was a lot of cheering and excitement on each side. The race was so close that one could say it was a draw. The players did a great job of putting their grooming knowledge to the test. 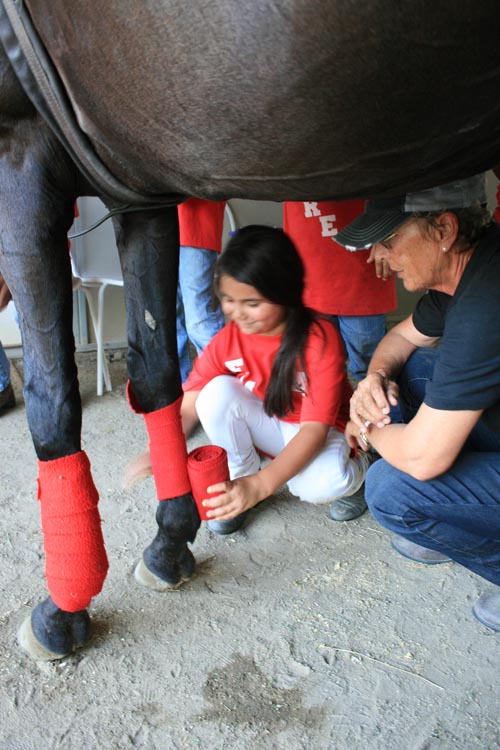 In our daily “chalk talk” sessions on Friday and Saturday, we went into detail about the rules of polo. After watching many polo games with kids swinging mallets and close calls, special emphasis was placed on knowing the right of way and what makes a dangerous play; understanding the phrase, Man-Line-Ball. Players learned the importance of each position on a polo team and what they were expected to do in the game. We also covered the polo rating system and referred to the 2012 USPA Rules Book as an important resource for knowing the rules of polo, the location and details about polo clubs in the U.S.

In our morning and evening polo practice sessions, the players put into action what they learned earlier from our discussions out on the playing field. Who has the right of way? What shot does the player have depending on the line of the ball and the direction the player is going? How do we manipulate our horses to prevent fouls?

On Saturday we worked mainly on playing technique. Players learned proper ride-off maneuvers, how to hook with the mallet, how to meet traffic and how to hit penalty shots. All the players know how to hit the polo ball on the off side, but this time they had to do it at speed … speed being a trot for some students and a canter for others.

One of our players demonstrated how important it is to have a tight grip with your upper leg in the saddle when you reach out to hit the ball, by tumbling over the horse’s neck. Being only six years old, it was a bit of a shock, but as she says, she feels as though she is a real polo player now that she has joined the “Crash and Burn Club.” We all fall off our horse at some point in our riding career.

On Sunday morning we played our final tournament game.

The game was very fast compared to the practice games previously played. Two chukkers were played with Sydney Jordan scoring the first goal for Empire White. Cameron Smith followed up with the next goal for Empire Black. At the end of the first chukker Sydney Jordan had scored another goal, making it 2 to 1 in favor of Empire White. In the second Chukker, using their ride-off strategy to take out Sydney Jordan, Empire Black was able to score 2 goals, one by Eleanore Smith and the other by Cameron Smith. Just as the horn blew, Sydney was able to hit the ball through the goal post for overtime, which was played in a penalty shot shoot out. Ella Bonilla was able to put it in the goal to win a tied score in the second shoot off, giving the win to Empire White.

During the awards presentation, each player received a scrolled parchment Certificate of Completion for their participation in Empire’s Youth Polo Summer Camp Program. It itemized the areas of proficiency each player achieved in the sport of Polo all of which our camp activities addressed.

In summary I would say that our Summer Camp Program was a huge success. We received positive feedback from parents, who were so amazed by what their children were able to accomplish in such a short period of time. The eagerness and laughter of the children themselves, their willingness to help each other and to get along so beautifully with every task set out before them underlined how the program was a positive experience for the kids. Through my own observation I was amazed at how quickly these players learned the importance of caring for polo horses, about the game of polo and their desire to learn more.

Empire Polo Club has done such a fabulous job allowing these young players the opportunity to use their beautiful facility and in making them feel so welcome. It gives each player great pride and motivation to excel in their polo talents and we all know it takes practice, practice, and more practice. Thank You Empire for all you do for these young players. We look forward to having a great season in the Fall and Winter this next year, and perhaps maybe a continued Camp Program reaching out to more future polo players this Winter.