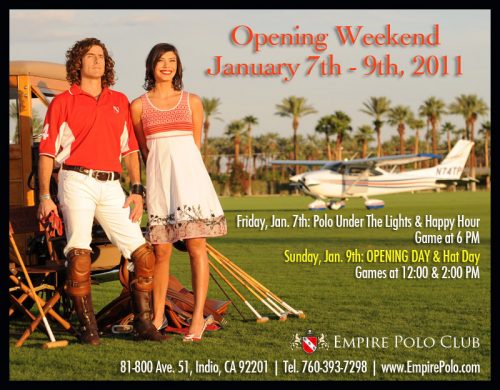 Indio, CA: Opening weekend kicks-off with Polo Under The Lights & Happy Hour on Friday, January 7th, 2011 at 6:00 PM.  Two teams will compete under the lights in a competitive polo match on the main field at Empire Polo Club.  General admission is free and everyone is welcome.  Happy Hour beverage service will be available on site during Polo Under The Lights games.

Opening Day of the 2011 polo season at Empire Polo Club is scheduled for Sunday, January 9th, 2011. After taking many years off from operating an active polo club, Empire Polo Club is now back in the polo saddle.  They are celebrating the  “Grand Re-Opening” of their polo club this winter and they would like the general public to help them make this inaugural season one to remember.

Sunday, January 9th 2011 is the “Official Opening Day” at Empire Polo Club.  Put on your best Sunday hat and join us for a celebration of traditional polo, desert-style.  While the dress code at polo is very casual, Empire Polo Club will host a hat contest on Opening Day.  We will be judging the hats in two divisions: the most traditional and the most creative.  Don’t be shy, put on the most outrageous hat you have and join in the fun.  A halftime, champagne divot stomp is scheduled during the 2:00 pm game and is sponsored by Korbel California Champagne.

What to wear? This is one of the most asked questions by spectators.  We suggest “hats and flats” as heels sink in the grass and the sun is always shining here in the desert.  Polo is a casual affair at Empire Polo Club, so please wear whatever you feel comfortable in. You will see spectators wearing everything from shorts, jeans and flip-flops to sun-dresses, khakis and button down shirts.  For more information about “How To Dress For Polo” visit our website at www.empirepolo.com.

What: Polo Games Open To The Public

During Sunday Polo the games are scheduled at 12:00 and 2:00 PM and are open to the public. General admission is free and includes seating in the field-side bleachers. Spectators are also welcome to bring their own chairs or a blanket for tailgating along the east side of the main field. Food and beverage service is available on site and restroom facilities.

From I-10 take the Monroe St. exit and head south on Monroe St.  Turn right on Avenue 50.  The entrance for this particular weekend will be the Empire Polo Club middle gate on Avenue 50.

What better way to spend your Sunday afternoon? Imagine sitting field-side, overlooking a series of immaculate polo fields surrounded by the majestic mountains in the distance while watching one of the fastest team sports on earth. You can take a date, your spouse, your family or a group of friends and enjoy a day outdoors while watching the polo ponies thunder along the fields below.  Polo is never boring when you have eight players traveling at speeds up to 30 miles-per- hour while riding-off other players, hooking their opponent’s mallets and hitting the ball at full speed. It is a great way to spend your day and general admission is FREE. You can’t beat that!

Established in 1987, Empire Polo Club is one of the largest polo clubs on the west coast with 7 polo fields and an indoor arena and a polo school. Polo is played Wednesday through Sunday, November through March with featured matches beginning on Sunday, January 9th at 12:00 and 2:00.

Empire Polo Club is a world-class, international polo club. Players from Canada, Mexico, Argentina, Maylaysia, The Philippines, South Africa, France, Germany, England and other countries flock to the desert to play polo at Empire Polo Club. Player’s ages range from the young up-and-comers, who are in their early teens to seniors in their 60s.