Empire Polo Club’s USPA Presidents’ Day Clinic and Tournament was held on Feb. 16th-18th. It was a fabulous polo experience for everyone who attended. The excellent weather combined with Empire’s world-class playing facilities created the perfect setting for the Junior Polo Clinic. 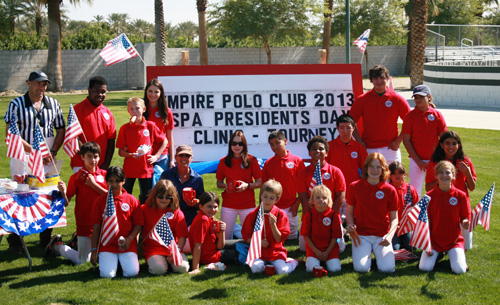 The young riders who participated came from all over the Southwest. Morgan Hoagland, a 15-year-old from Denver, played on Empire’s White Team along with Rhyo Keyfauver, Eleanore and Cameron Smith. Bayne Bossom, Griffin Brecheen and Natalie Darquea, all from the Los Angeles area, teamed up with Grant Hartzell-Russell from La Quinta tomade up the Empire Black Team. These two teams met on Empire’s Field #1 for a demonstration game. The Sunday Polo audience was impressed with how fast and hard these young people could play polo. The teams tied-up the game in the end and everyone who played was a winner!

On Saturday morning Wilbur O’Ferrall conducted a USPA Junior Polo Clinic. He instructed a group of 20 players aged 5-18. The Clinic was designed to address all levels of playing abilities. O’Ferrall focused the content of the Clinic on the opportunities to play polo interscholastically and at the college level. He showed a match between U CONN vs. University of Virginia on the big screen TV monitor, pointing out playing strategies and infractions.

Working with Connie Atkinson in the arena with foot mallets, O’Ferrall worked with the players to help each one perfect their swing. He also taught running plays, riding-off and how to score goals. After a lunch of pizza, everyone mounted their horses and practiced their new skills in a polo game.

On Monday Empire hosted the Junior Polo Presidents’ Day Tournament. There were two teams of four in the arena and three teams of four on the grass.

EMPIRE WHITE stayed up to meet EMPIRE RED, consisting of Alexis Payan, Gracie Gonzalez, Alyssa Garcia and Randy Heredia. It was a fast and hard fought game with Rhyo hitting in the winning goal for WHITE. 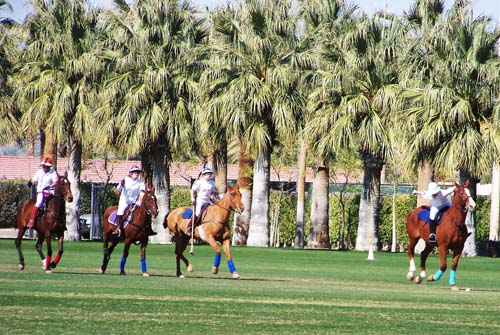 After the grass game ended, everyone headed to the arena to watch URBAN DOG play against OLMAN/COOLEY ATTORNEYS AT LAW in the lower bracket. URBAN DOG players consisted of Connor Garsed, Ella Bonilla, Stacy Mouchti and Rosie Gonzales, ages seven through twelve. OLDMAN/COOLEY’s team was made up with Devin Gallemore from Yuma, AZ, Thomas Steinke, Alyssa Garcia and Ian Hartzell-Russel, ages five through sixteen. It was a close first chukker with no score.

For the final chukker between URBAN DOG vs. OLDMAN/COOLEY, Ian and Devin both played hard, but they were no match for the steady hand of Connor, Ella, Stacy and Rosie who guided the team to a 3-0 victory. In the lower level, URBAN DOG won 1st place and OLDMAN/COOLEY ATTORNEYS AT LAW placed 2nd.

After the games, trophies consisting of a red polo mug and a red remembrance polo shirt were awarded to each of the players. Two huge Presidents’ Day cakes were donated for the occasion by Kathy Kolb. It was a great polo experience, one to be remembered for a long time to come.

Thank you Empire for your tremendous hospitality. Thank you players and parents for your participation. We hope to see you next year when the USPA plans on making our Presidents’ Day Tournament at Empire an annual event.