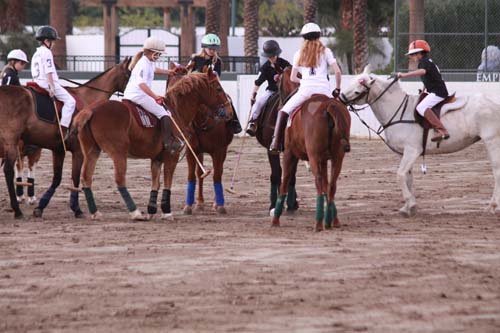 All the children who participated had a great time! We had two children, Colby Smith, 9 and Kirby Montgomery, 11 coming from Washington and Toronto, Canada to play with us. Empire Polo Club’s regular Members are always happy to meet new players and make them feel welcome.

Saturday night two teams played against each other with Rhyo Rainsford and Eleanore Smith battling it out against Cameron Smith and Gracie Gonzales. Their competitiveness left many of the other players scrambling to keep up. 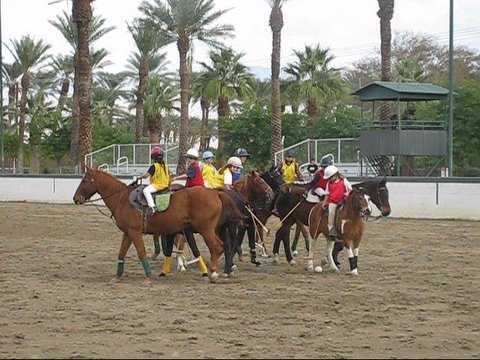 In order to make the teams more balanced, on Sunday night, we had 4 teams of 3, based primarily on playing skill level. Rosie Gonzales was the high-scorer for Empire’s White team with great assists coming from Eleanore Smith. For Empire’s Black team it was Conner Garsed, who was instrumental in moving the ball right along and fighting it out against Eleanore and Rosie. Colby Smith and Ella Bonilla played great defense, but they were no match for Empire White’s offensive game. In the final play of the last chukker, Kirby Montgomery, brand new to the sport ,was able to score her goal as she struggled to drive her horse into the play just before the final horn blew. Very well done by all the players. The more opportunities they have to play, the better they get.

For our more advanced teams, we had the opportunity to have Rhandy Heredia play with Conner Garsed and Rhyo Rainsford representing Empire’s Black team against Eleanore Smith, Cameron Smith and Gracie Gonzales for Urban Dog’s Green team . After the first chukker, Green was down by 4 goals and discouraged. Cameron had horse trouble and needed to change mounts after the boys complained about her horse biting them in the ride-offs. She tried to say “that’s polo”, but she switched anyway.

The boys proved to be too quick and accurate for the ladies with Rhyo Rainsford being the high-scorer of the game. It was a very well played game with handshakes all around. Funny how difficult that is for 10 thru 13 year olds to shake hands. As Gracie Gonzales age 10, explained it, “Boys have koodies.” However, polo is teaching our kids SPORTSMANSHIP whether they win or lose.Connie Atkinson, Empire’s Junior Polo Program Director wouldn’t let them out of the gate until all hands were shook and “Thank you, umpire” were demonstrated by all.

All of the playing horses wore their patriotic American Flag boutonnières on their bridles and all players received beautiful Empire polo shirts, compliments of Ben Smith for their participation in our tournament. A special thank you to Ben Smith, Jenny Gonzales, Sarah Myers and Samantha Van Duynhoven for their help in putting on the tournament. Thank you also Parents, for your valuable support for our future polo players.