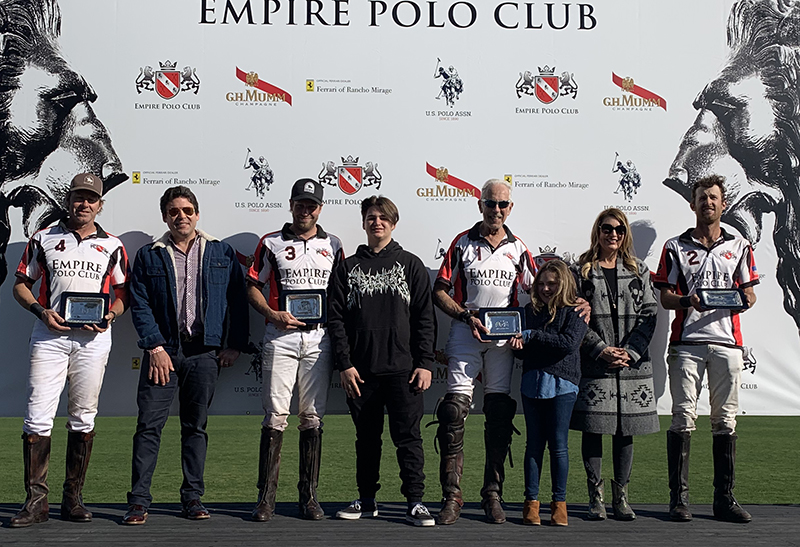 It was an amazing match in the 8-Goal, as these two All-American teams went to battle. Stimmel put the first two points on the board for Empire. That ended the first time period, 2 to 0. Nick Cifuni turned it on in the second chukker with a 60 yard cut-shot from the field and three successful penalty shots. Robert Payne Senior wiggled through a crowded goal mouth to add one for Empire, which ended the second time period with a close score of 4 to 3. The only goal in the third chukker was made by Carlos Galindo, sending the players to half time with Evergreen leading, 5 to 3. The second half kicked off when Rob Payne converted a long penalty 5A.  Evergreen was awarded a penalty 1. Stimmel added a point for Empire, cutting Evergreen’s lead to one point at the end of the fourth chukker, with the score 6 to 5.  In the fifth time period Empire added two points to Evergreen’s one, making it a tied ball game, 7 to 7. Both teams came out firing in the final chukker. Stimmel was the first to score, followed by Carlitos Galindo scoring a penalty 3, keeping this intense match tied at 8 to 8. Carlitos then wowed the crowd with a wide-open run the length of  the entire field and through thegoal on his mare, Pistola. It was Rob Scapa that rallied back with his shot through the posts that tied the game again, 9 to 9. Russell Stimmel’s successful penalty 2 put Empire ahead at the final horn, 10 to 9.

There are six teams in the 4-Goal Sportsmanship Cup, 2-week tournament. On Sunday afternoon Archangel/Granite Bay, (Eric Hammon 0, Jeffery Rewald 0, Ashton Wolf 3, Alonso Andrade 1) faced Sawyer Aviation, (David Barnett 0, Olivier Climaud 0, Juan Jo Gonzalez 3, Cameron Smith 1). Eric Hammon started the scoring, with two unanswered goals in the first chukker. Alonso’s penalty 3 conversion was the only score in the second time period. In the third chukker Ashton Wolf scored twice and Alonso Andrade scored twice, ending the first half of this 5 chukker game with Archangel/Granite Bay ahead, 7 to 0. The fourth time period started with Alonso increased the lead with two more goals, followed by Eric Hammon scoring one. Then Olivier Climaud put Sawyer Aviation on the board with two goals. The fifth and final chukker started with a 10 to 2 score. Juan Jo Gonzalez, who played an amazing game, put another point on the board for Sawyer Aviation. Olivier added a goal, but Archangel/Granite Bay answered with two goals and won the game 12 to 4.