Lockton,(Jenny Bernardoni 0, Tommy Costello 1, Nicolas Maciel 3, Shane Rice 4) met STG, (John Ziegler 0, John Bickford 1, Leandro Flocarri 2, Martin Jauregui 5t). John Bickford began the scoring putting one on the board for STG, to be answered by Shane’s two goals ending chukker one 2-1.  Lockton’s Jauregui added three, and Bickford made a goal in the second chukker for STG. Rice put a penalty three through the posts, switching the lead to STG, 5 to 3. After Lockton added three points and STG added two in the third time period, the half-time score was 7 to 6, STG. Shane Rice racked up four more points, (a total of nine), for Lockton. STG did add two more points which ended the game 10 to 9, Lockton.

Sunday’s 8-goal President’s Day 12:00 match was between STG and Club Polo Cabo. The teams each scored a goal in chukker one. STG added three penalty shots in chukker two, answered by two goals by Club Polo Cabo. Four goals by STG put them ahead at half time 8 to 4, adding one point scored by Payne in the third chukker. It was a crowd-pleasing game as the second half was wide open. STG added five more goals and out-scored Club Polo Cabo’s four goals in the second half of the game. STG ended up winning the match 13 to 8. 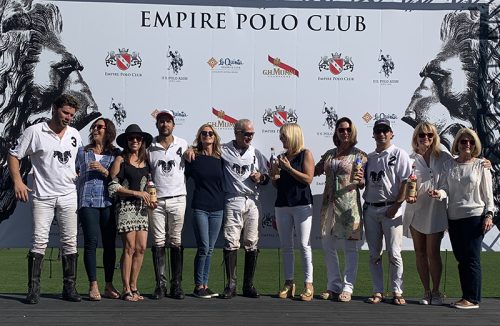 Monday’s make-up 4-goal games started with Evergreen against Empire. Evergreen scored six goals in the first half, to Empire’s one, ending the half with an Evergreen lead of 6 to 1. Although Empire out-scored Evergreen five to four in the second half, Evergreen won the game, 10 to 6.

Hanalei Bay took on the Buffalos. The first two chukkers were fairly evenly matched, ending chukker two with a Buffalo lead, 3 to 2. Then Hanalei Bay added three unanswered points in the third time period, putting them in the lead, 5 to 3. Each team scored five more times, making the final score 10 to 8, Hanalei Bay.