First Tournament of the Season on the Grass Fields
December 1st-2nd, 2012

The Desert Challenge, the first tournament of the 2012-’13 season to be played on the grass fields of the Empire Polo Club, was a two day affair between the teams of the Hellraisers: Joe Ochoa; Cameron Smith; Ernesto Bautista; Doug Blumenthal and Templar: Lyn Cobb; Ray Del Rosario; Ashton Wolf; Jared Sheldon.

When the dust settled on the first day of competition between these two teams the result was a tie, 7-7, the two teams would enter Sunday’s match with an equal opportunity to secure the victory.  Joe Ochoa was the first to strike to put the Hellraisers into an early lead, but Ray Del Rosario answered back quickly to tie it up for Templar.  A goal by Doug Blumenthal and two more by Ochoa had the Hellraisers with a 4-2 lead going into halftime.  Templar came out for the second half swinging. Ashton Wolf was the first to score and Lyn Cobb tied the game up at 4.  Next it was the Jared Sheldon show.  Sheldon scored two quick goals for Templar, Ochoa answered back with a goal for the Hellraisers and Sheldon put the final nail in the coffin, one more goal to seal the deal and end the match with a victory for Templar with a final score of 7-5.   Sheldon and Ochoa, with 4 goals apiece, were the high-scorers for their respective teams. 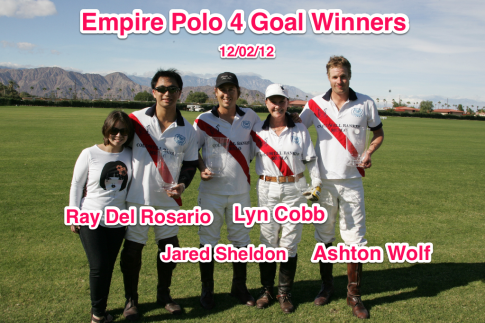 The Desert Challenge 1 goal tournament final featured Rancho Esperanza: Ron Thompson/Suki Piper; Joey Gallemore; Lolo Payan; Goyo Mariscal vs. Barbados: Shane Flock; Doug Schneider; Jared Sheldon; Ted Okie.  When the clock ran out on regulation time this match was all tied up at 7, sending the two teams into a shootout to determine the champion.  Barbados emerged as the victor.  The high-scorer of the match was Rancho Esperanza’s Lolo Payan with 4 goals in regulation and for Barbados Jared Sheldon led the way with 3 goals.