Empire Polo Club offers two money games at the end of their winter season.  The 8-10 Goal Champions’ Cup and the 4-Goal Lions’ Cup.  There is an entry fee of $5,000 per team for the 8-10 Goal Tournament and a fee of $1000 for the 4-Goal teams.  Empire Polo Club matches the funds in the purse for each of these tournaments.

This year we have 8 teams competing in the Lions’ Cup bringing a full purse of $16,000 to be distributed after the finals to the top three finalists of this exciting tournament.

The 8-10 Goal Champions’ Cup has 5 teams competing for a total of $50,000 in prize money which is distributed to the top 4 finalists.  See attached flier for distribution details.

General admission and tailgating is free.  Spectators welcome. The featured games are on Sunday’s on field #1. Enter the Empire Polo Club using the gates on Ave. 50 near the intersection of Ave. 50 and Monroe St.

Here is a link to the tournament coverage from last year and a few photos. 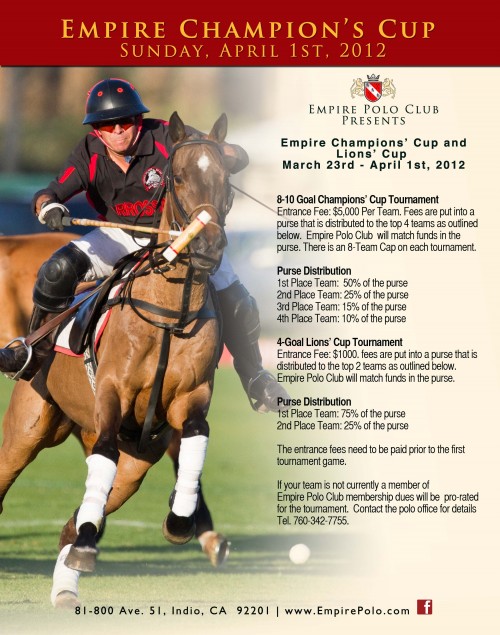