What a beautiful weekend in the desert at Empire’s Polo Arena . This was the setting where two matched teams in each the A Flight and B Flight Division, challenged each other  for the Oldman/Cooley vs. Urban Dog tournament title put on by sponsors, Susan Cooley of Oldman/Cooley Attorneys at Law and  Kim Garsed of Urban Dog, L. A. ‘s finest dog care facility. 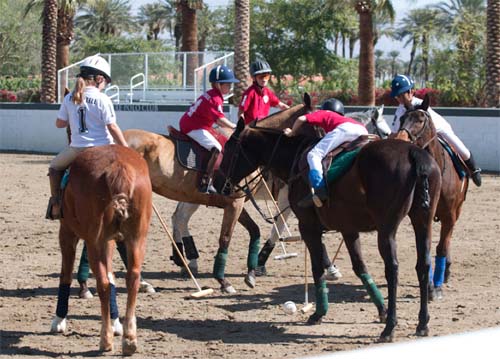 So what got these two ladies interested in the desert’s youth polo? For one,  Susan Cooley found out about our  beginning  program and retired her favorite horse, Evita to work with the children. Evita now has a second career, teaching 10 year old Eleanore Smith how to play a fast and accurate game of polo.

Kim Garsed has watched her son, Conner, go from being lead around on the back of a horse, to riding his horse out onto the field and mixing it up with other players with remarkable accuracy of ball handling, even if he isn’t running and gunning. Bill Atkinson, the youth program’s retired 7 goal player who coaches the children will testify there is nothing wrong with his strategy and technique. He did it all the time and won many a game this way. Both women have been tremendously  supportive of the Future Polo Players of Coachella Valley and a tournament in honor of their help and efforts seemed appropriate. 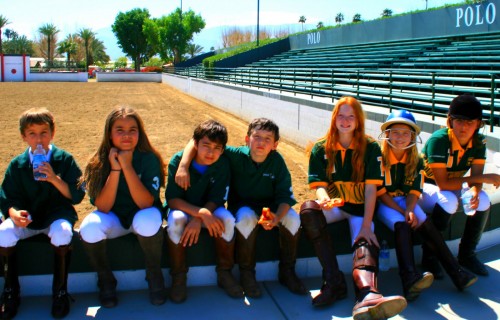 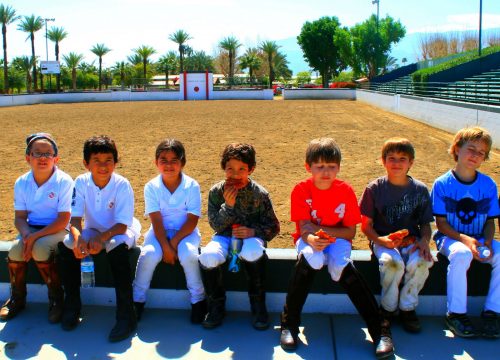 The A flight team for Urban Dog was: Rhyo Rainsford, Gracie Gonzales, Riley Jordan including Grant Palmer playing in the second chukker. Oldman/Cooley Attorneys at Law, the team was Sydney Jordan, Cameron Smith and Eleanore Smith.

B Flight Urban Dog in Empire Red was  Conner Garsed,  Colby Smith, Rosie Gonzales and Luke Doty, with Riley Jordan substituting for Luke when he was forced to leave the chukker due to an irritated skin injury on his leg. Oldman/Cooley Attorneys at Law in Empire White was Grant Palmer, Rexy Vicardo, Miles Doty and Sofia Bonilla. Ella Bonilla, who just turned seven years old on Saturday came down with the flu and was unable to play Sunday.

Each flight played a total of two chukkers with the B flight leading off on  Sunday’s game. The time changed to spring forward and yes, there were people late coming to the field. However the games were able to begin in a timely manner. We were surprised and honored to have visiting dignitaries from the USPA, Amanda Hersey and Justin Powers, come by and see what our youth program is all about and watch the children play for a while. It was nice to see them taking an interest in our Coachella Valley polo kids.

Anyone who has ever had the pleasure of being around sporting children will appreciate the competition that takes place on the field. I find the running dialogue between the players extremely entertaining, especially if I were to compare it to some of the competing forces of adult polo. For example on Saturday, Gracie Gonzales was just about to hit the ball into goal when Rhyo Rainsford stole it out from under her on the near side. Gracie screams to Rhyo, “Rhyo, you are a destroyer  of hopes and dreams!” as she is running behind him trying to get the ball back. I hadn’t heard that before.  I am so impressed at the way the children play with each other in total support and camaraderie I hope it stays instilled in them as they grow further into this sport.

As the horn sounded in the final chukker, Oldman/Cooley defeated Urban Dog in the A Flight with MVP given to Sydney Jordan for her outstanding efforts. Best Sportsmanship went to Gracie Gonzales. In the B Flight, MVP was Rexy Vicardo as he truly showed his improved riding and playing skills since starting with us at the beginning of the season.  Best Sportsmanship went to Rosie Gonzales, the younger sister of Gracie. Jenny and Mondo Gonzales, the parents of the two sisters, must be doing all the right things to have both girls recognized for their wonderful attitudes and playing performances. 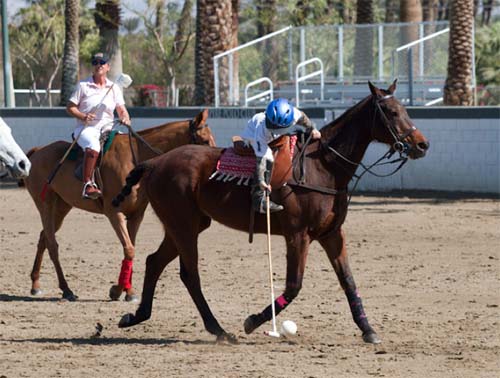 In conclusion I would like to suggest if clubs have a difficult time getting players to the trophy presentation  in a timely manner, they might want to try this strategy. Simply say, “We have Pizza at the Trophy table.” The players were at the presentation in record time. Each player was presented with a first place gold medallion ,or second place silver medallion  inscribed with the tournament name and date.

Thank  you again, Susan Cooley and Kim Garsed  for all your wonderful support as these children continue to develop their playing skills and knowledge of the sport we love and the horses they play. Also, a big thanks to George Gilstrap at Jackson Hole Emporium for his MVP and Best Sportsmanship gift certificates.  Combined with  the efforts of Al Haagan, and the many parents and interested individuals who jumped in and helped, this tournament  was a huge success and so much fun for everyone. Well done all of us, Bravo!

To see all photos from this tournament …

To view photos by Jim Bremner from this tournament, visit this link.

To view photos by Samantha’s gallery, visit this link.