There seems to be no stopping the Evergreen polo team (Tom Sprung, Carlitos Galindo, Juan Jo Gonzales and Bayne Bossom) as they scored wins over both Empire (Rob Scapa, Eileen Duffy, Erik Wright and Jim Wright) and C & R Farms (Cheryl Shindell, Luis Saracco, Ross Adam and Alonzo Cruz) over the course of the last two weeks on their way to the 4-goal USPA General Patton Cup at the Empire Polo Club.

Carlitos Galindo, tournament high-scorer, continued to lead the Evergreen attack against Empire, but every member of the team got on the scoreboard in the Sunday afternoon match.

Evergreen edged themselves to a 4-3 halftime lead on the strength of two goals from Galindo and single goals from teammates Tom Sprung and Juan Jo Gonzalez.

The two teams exchanged goals in the fourth with Galindo adding his third and Sprung scoring for the second time on the day. Empire matched them goal for goal but continued to trail, 6-5. 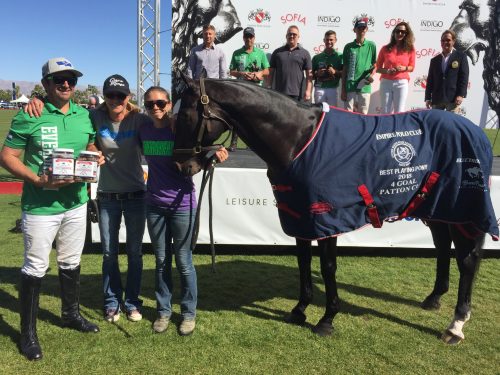 Two fifth period Empire goals leveled the score at 7-7 but sixth chukker goals from Sprung, Blayne Bossom (who earned MVP honors for is efforts) and Gonzalez canceled Rob Scapa’s fourth goal of the game and carried them to a resounding 10-8 win. Ice Man, owned and played by Carlos Galindo won Best Playing Pony. 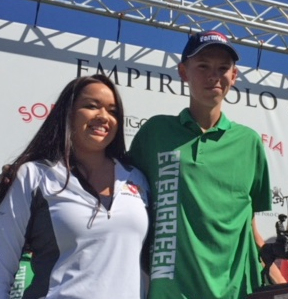