The Empire Polo Club welcomed players to the season with the Desert Challenge Arena Tournament at Calhoun Ranch, a new facility complete with a new arena and grass polo field.

After playing a practice game on Saturday the teams met for Sunday’s match. 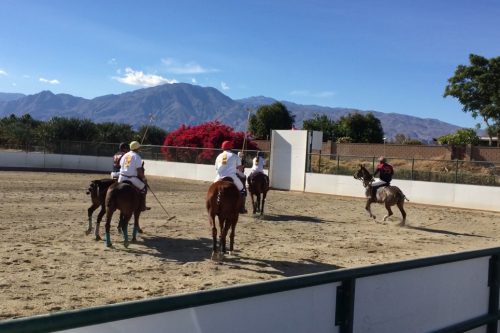 Great Scott received one goal by handicap, and finished the first, scoreless chukker with a one point lead, 1-0. In the second chukker, Great Scotts’ Ella Bonilla out maneuvered opponents to make the first goal of the day, which was answered by Fawkes Engineering’s Andy Schnoebelen. The first half ended with Great Scott! up by one goal,  2-1.

Clair Jenkin’s hit the ball well all day and put one on the board for Fawke’s Engineering in the third chukker ending the period in a 2-2 tie. In the final chukker, Andy Schoebelen managed to slip by Manny Rodriguez, scoring twice to put his team in the lead by two. Great Scott’s Ella Bonilla answered with her second goal of the day. Time was on Fawke’s Engineering’s side, who held on for the 4-3 win.