Who says it is too hot to play polo in the desert? 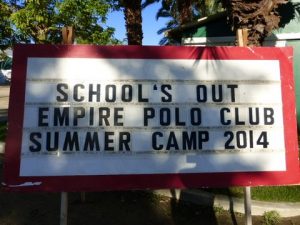 …. Not the kids attending Empire Polo Club’s “SCHOOL IS OUT/POLO IS IN” Summer Camp!

Playing polo in the desert during the summer is simply a matter scheduling. You need to wake up early, take a “siesta” during the heat of the day and come back to play again in the evening. All of our committed young players were at the barn by 7:30 AM and in the saddle by 8:30 AM. The campers were split into beginner and experienced player groups. Beginners were in the arena learning the basics of the game with Connie Atkinson, while the more experienced players were taking their instruction on the grass under the supervision of Primo Navarro in the morning, and Jessica Bailey in the evening. 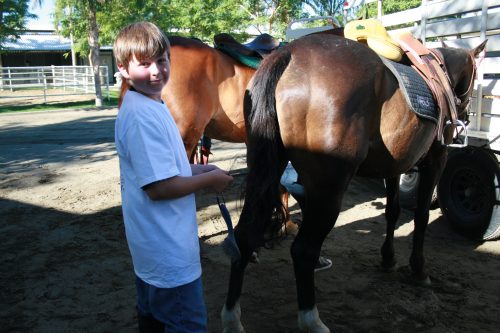 Empire’s Polo Camp focused on teaching players good horsemanship, polo playing strategies, hitting skills, rules of the game and general horse care. Each player had the responsibility of taking care of his/her own horse and tack. They also learned the basics of polo tack; how it works to control a horse during a game. They also were responsible for tacking-up their own horses (including tying tails and polo wraps). 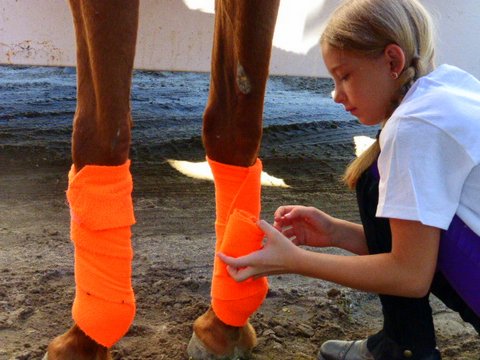 On the final morning of camp, all players participated in a Groom’s Race. There were three teams of four, beginners were required to ride the tacked horse across the finish line for a chance to pick first from the “Treasure Chest”. As it happened, the first two teams to cross the finish line were disqualified due to a tack problem. One team forgot to tie the tail and the other forgot to fasten the breast collar resulting in the last team over the finish line winning the race! These new players will always remember to do a full-tack check before going out on the polo field. Safety comes first! 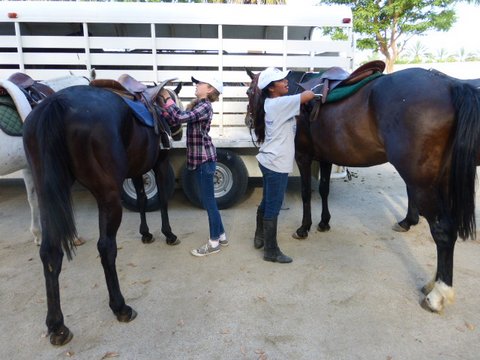 The final evening of the camp, all parents and family were invited to watch their children play a two chukker tournament demonstrating their polo skills and team work. Starting in the arena for the beginners, then stepping over to the grass field to watch the advanced players, parents and families were able to see how well kids can progress in the sport. In four short days, our beginners were hitting the ball at a trot and slow canter and our advanced teams were playing at speed. It makes us all very proud at Empire Polo Club to be able to say these are Empire Kids. What a great group of players, parents and polo staff. Everyone had a wonderful time and no one remembers the weather … WHAT HEAT?

Many of our young players are off to Santa Barbara to play against other up-and-coming polo players in Southern California later in July. We think we have the advantage – we know what it’s like to play when the heat is on!