For the second time in the history of polo in the desert, there will be a high-goal Arena Polo Game right here at Empire Polo Club. The United States Polo Association (USPA) has awarded the 23-Goal USPA Townsend International Challenge Cup to Empire Polo Club. The game will be played on Saturday, January 12th, 2013. This game represents the highest level of polo currently played on the west coast. If you were to compare polo to golf, the Townsend Cup would be PGA Tour level polo. Empire Polo Club and the local polo community are very excited to host such an historic event.

USPA Townsend Cup Arena Challenge Game – Saturday, January 12th, 2013
The USPA Townsend Cup is an arena challenge game traditionally played between teams from the U.S. and England. The game will be handicapped at 23-goals, which means that all of the player’s handicaps on one team, when combined, equal 23 goals. The higher the polo handicap is, the higher the skill level of the players and their team. A 23-Goal arena game is a rare opportunity and one that you won’t want to miss.

Professional polo players are flying in from England and various parts of the U.S. to compete in this 1-day event. The highest-rated arena polo player in the world is Tommy Biddle, rated 10-Goals. He will be representing the United States in this tournament and he is the U.S.A. Team Captain.

Food and beverage concessions will be available for purchase on site during the game. The Empire Polo Arena offers bleacher seating for spectators. All seats are General Admission, which is free and open to the public. There is no VIP seating at this event.

For more information about this event spectators can visit www.EmpirePolo.com.

Empire Polo Club is honored to host the USPA Townsend Cup on January 12th, 2013 and to be part of such an historic event. To continue the promotion and growth of arena polo here in the desert and in the United States, Empire Polo Club invites the public to join us in welcoming England to our county and to show support both teams as they compete for the title.

About Empire Polo Club
Established in 1987, Empire Polo Club is one of the largest polo clubs on the west coast with 12 polo fields and an indoor arena and a polo school. Polo is played Wednesday through Sunday, November through March 31st, 2013 with featured matches on Friday evenings and Sunday afternoons. 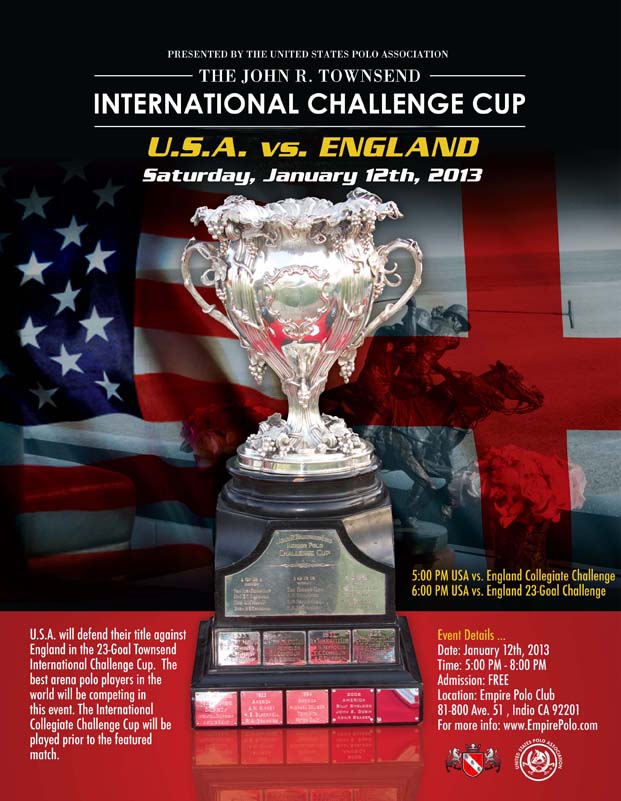