A large and enthusiastic crowd was on hand and it was a back-and-forth battle that put an exclamation mark at the end of an exciting day of polo at the Empire Polo Club Sunday afternoon.  In the final game of the day, Spindrift (Leslie Tims, John Bickford, Juan Curbelo and Luis Saracco) rebounded from a last chukker rally by STG (John Ziegler, Tommy Costello, Max Menini and Francisco Guinazu) to win the 2018 USPA General Patton 8-goal Cup.

Juan Curbelo opened the scoring with a goal from the field for the early Spindrift advantage, but fouls proved costly in the early goings.  Penalty goals from STG’s Max Menini and Francisco Guinazu closed out the chukker with STG on top, 2-1.

Curbelo tied it at 2-2 with his second goal of the game, but STG countered with a 40-yard penalty goal from Guinazu for a fragile one goal advantage, 3-2.  Leslie Tims scored the final goal of the period, leveling the score at three goals apiece, 3-3.

The Spindrift defenders were on their game in the third.  Shutout defense coupled with a pair of 40-yard penalty conversions from John Bickford gave the lead to Spindrift, 5-3.

Two more penalty goals from Bickford and a goal from the field from Luis Saracco and a second consecutive scoreless chukker for STG saw Spindrift expand their lead to five goals, 8-3, with just two periods of regulation play remaining.

The STG offense came alive in the fifth with Menini opening with a goal from the field followed by two penalty goals from Guinazu, 8-6.  Bickford converted a penalty shot from the 30-yard mark, 9-6, with Menini adding the final goal of the period.  Spindrift continued to lead but a storming STG team appeared to have morphed into attack mode, and trailed by just two goals, 9-7.

The momentum remained with STG as the final chukker got underway.  Guinazu’s fifth goal of the day had STG within a goal of the lead, 9-8, and Tommy Costello’s first goal of the afternoon had it all even at 9-9.  Both teams pressed frantically for the winning goal and with 13 seconds on the clock it was Saracco executing the winning shot for the 10-9 win.

All five of Bickford’s five goals came on penalty shots and earned him MVP honors.  Saracco and Curbelo each scored twice and Tims added a goal for the Cup.  Guinazu was STG’s top scorer with five goals (four on penalty conversions).  Menini scored three times (twice on penalty shots) and Costello was credited with a goal in the loss. 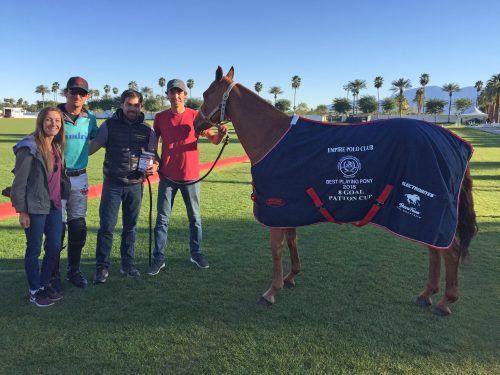 Following a weekend off, polo returns to the Empire Polo Club on March 9th with the 8-goal USPA Constitution Cup and on March 19th with the USPA Congressional Cup.

General Admission and tailgating are free with a $20 parking fee. VIP is $30 per person with a reservation. Call 760-393-7298 for VIP reservations. Entrance is on Ave. 50 between Madison St. and Monroe St. Visit http://www.EmpirePolo.com for more details