You are here: Home / Archives for connie atkinson

School is OUT and Summer polo is IN! Empire Polo Club is pleased to be hosting its annual Summer Polo Day Camp for children. Beginners to more advanced players are welcome to join Connie Atkinson and Empire’s polo instruction staff to learn more about the game of polo, horse care and riding skills.

Requirements: U. S. P. A membership is required of all participants. New players are eligible for one free year of membership. 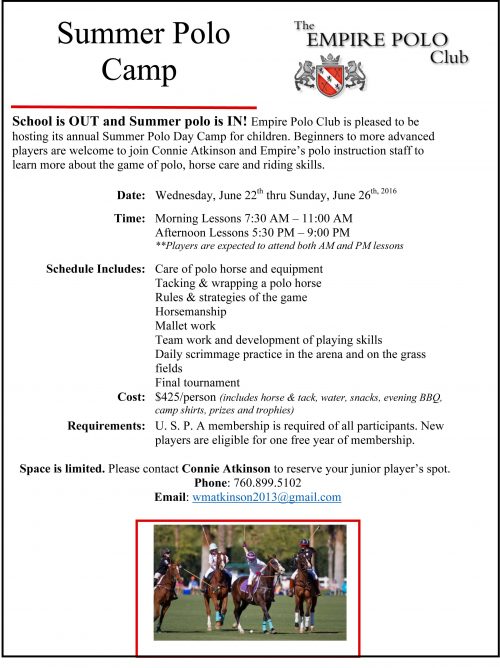 The inaugural 2016 “POLOCHELLA” event, took place on February 13th & 14th at Empire Polo Club, in Indio, CA. The tournament was organized to benefit the youth polo program run throughout the year at the Empire Polo Club. The kick-off event was a resounding success! Many local spectators said Polochella was their first introduction to polo. They were not aware of the strong community and passion for the sport in the Coachella Valley before seeing sponsor ads and attending the event. Watching the youth event drew them onto higher goal games later in the day at both Empire and Eldorado polo clubs, creating record breaking crowds for Sunday games.

The Spring weather for “POLOCHELLA” was sunny and warm making a perfect environment for early polo games in the desert. The two advanced division teams were sponsored by local companies; Desert Health Magazine and JRussell Hair Salon (Firestone Four).

The results of this very fast, hard fought game between two very competitive teams was Firestone Four 7 and Desert Health Nuts 4. Riley Jordan’s horse, “Tuscany” won BBP. Kudos to both Piers Bossom and Ryan Kerley for stepping up into the advanced division for the first time. All riders played amazingly well and were wonderful sportsmen. 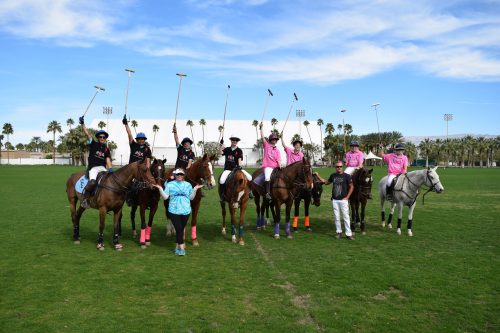 L&G’s Desert Dynamo’s was played by the middle school interscholastic team from the Davis, California area. This was the first time Lily Gonzales, Carolyn Mathews and Josh Barraza had the opportunity to play on a grass field. They loved it! On the team was Josh Dubarry visiting from Miami, Florida. The Olympia’s Angels team was represented by Empires own local team of young female players, who won the intermediate division. Second place was given to L&G’s Desert Dynamo’s and third went to PBLA Polo Magic. Elise Pardue’s horse, Salty, won BBP. The umpire, Suki Piper, awarded Jasmine Trotz best Sportsman for her exemplary attitude and show of respect for riders and horses on the field. Bonnie Magill donated her time as the announcer and score keeper, and kept things running on schedule.

In the first day of the walk/trot division 3 chukkers were played. Nathan Hubert was the high scorer riding a horse named “Freckles”. Teams were changed up on the second day to ensure all players had an opportunity to play with and against each other. On Sunday, Justine Keyfauver was the high scorer for her team. She was able to contain Nathan with many a nearside hook. Polochella Pegasus was triumphant over Shear madness by 2 goals. 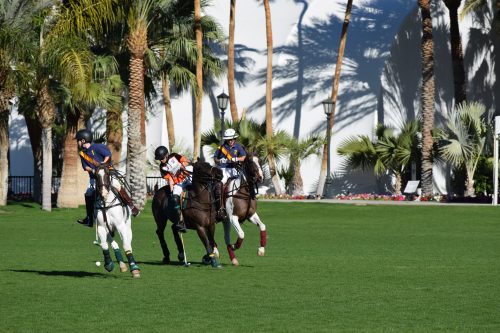 Saturday Night, Polochella players and parents dined and danced on Empire’s Tackroom Tavern’s special events patio. The best part of the party (all the children will agree) was the cotton candy machine, like a dream come true! Did they dance at Polochella? Yes, they did to the hip hop music of D J Boost, David Ponce . “This is the best party ever and it’s not even someone’s birthday”, said 7 year old, Adam Keyfauver, one of the many dance masters of the night. 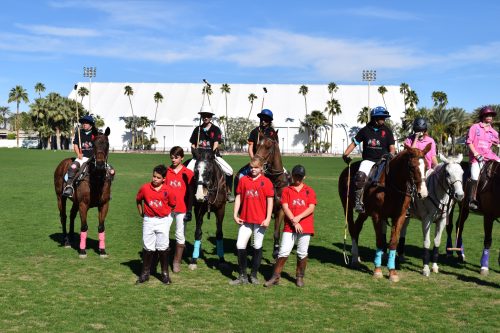 In conclusion, after a wonderfully successful polo tournament and party, we must acknowledge the hard working parents who brought this fun filled idea to life: Kate Rust, Jill Bonilla and Hayward Pardue. Without their dedication to youth polo and their commitment of time and energy Polochella would have just been a novel idea. We were extremely fortunate to have the support of so many local sponsors: our camera man Dave Rhea, straight from the Hollywood studios of Ellen Degeneres, Bonnie Magil our announcer and score keeper, umpires Suki Piper and Roxy Keyfauver, flaggers, Dave Jenkins/ Olympia Granger, thank you to all involved in making this special event happen! Finally we need to thank our players for their enthusiasm and sportsman like behavior, and our beloved horses who played like champions and kept our children safe in a game we love. Connie Atkinson’s retired polo pony string continue to introduce the game of polo to all those who want to play.

Thank you Empire Polo Club for the beautiful facilities.

Let’s do this again next year! 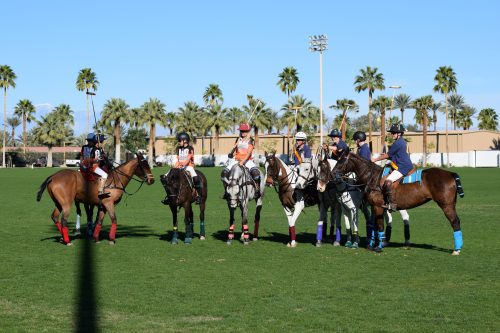