You are here: Home / Archives for nacho figueras

One of the most often asked questions when questioned about going to polo is “What should I wear?”, and the answer is there is no correct or incorrect answer.  You can dress up or dress down and fit in to any Sunday event, but you should pay attention to how and from where you plan on watching the match, as there seem to be unwritten dress codes that are apparent.

Attending a polo match is akin to stepping onto the pages of F. Scott Fitzgerald’s “Great Gatsby”, allowing women the luxury of dressing to the nines (for afternoon wear), with elegant sun dresses and fashionable hats a polo tradition, while men have the option of wearing a jacket, or not, with slacks or jeans.

Unlike some more formal polo settings you might find at London’s Windsor Park or Spain’s Sotogrande, Indio’s Empire Polo Club embraces a relaxed approach to the game that features everything from blazers to shorts, heels to flip flops.

Sporting attire is evident, and is often taken from the pages of “Palm Springs Life” in the club’s VIP section. Tailgaters at the Empire Polo Club tends to more reminiscent of gatherings you might find in parking lots before football games, but to date, there have been no face paintings!

It is always a good idea to call the club (760-342-7755) to confirm game times and field locations, if you’re looking for anything besides the featured 2 pm Sunday stadium game.  And remember, ladies, when selecting footwear that six-inch stiletto heels aren’t the best choice for the traditional halftime divot stomps.

The 2017-2018 Empire Polo season attracts players from across the county and around the world and offers fourteen weekends of fast-paced polo in the beautiful relaxed setting of California’s winter playground.

The Empire Polo Club is located at 81-800 Avenue 51 in Indio, CA.  for further information go to the club website at http://empirepolo.com.

Spectators will have the opportunity to watch Nacho in action, doing what he loves to do best, play polo. Nacho’s game schedule will be posted on www.EmpirePolo.com and updated weekly during the month of February. 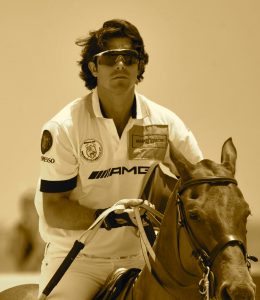 “I’m thrilled that Nacho will be joining us this winter,” said Alex Haagen, III, owner of Empire Polo Club. “Nacho has done more than any other player to promote and grow the sport of polo. He’s also given generously of his time and support to hundreds of charities over the years. We’re honored he’s chosen to play at Empire Polo Club this season.”

Nacho Figueras may be best known internationally as the face of Ralph Lauren’s line of Polo fragrances. According to Conan O’Brien, “he’s one of the greatest polo players in the world.” Oprah Winfrey calls him “one of the most handsome men in the world,” while Lara Logan of 60 Minutes describes him as “the game’s greatest ambassador.”

“The success I have had modeling has given me more fame and publicity than polo has,” Figueras confesses. “So I am trying to use that publicity as a platform from which to promote the game I love so much, to make it more accessible to the general public.”

Sunday Polo games are scheduled every week from January 3rd through April 3rd, 2016. The polo club will be closed on Sunday, January 17th and again on Sunday, March 6th, 2016.

VIP Admission is $25 per person and includes parking, VIP seating and a complimentary Champagne Divot Stomp. The VIP seating area is located in front of the Olympic-peaked tents on the west side of the main polo field and offers field-side covered seating.

Reservations for VIP seating are highly recommended. Food and beverage service is available onsite during the Sunday matches. No outside food or beverages are allowed into the VIP area. For VIP reservations or group rates please call 760-393-7298 or email tonyschieffer@empirepolo.com.

Directions/Location
The entrance for Sunday Polo games at Empire Polo Club is on Ave. 50 between Madison St. and Monroe St.

From Interstate 10 take the Monroe St. exit. Head south on Monroe St. Take a right on Ave. 50 and you will see the Empire entrance gates on the left side of the road. Use the middle gate for tailgating access and General Admission parking. If you are a cabana holder, have VIP reservations for a table or if you are part of a group with reservations, use the third gate to access the VIP parking area.