The new Empire League is being played throughout the month of January.  The level of play is 6-8 Goal.  The format is a little different from our traditional polo tournament format.  Four Patrons hire a pro from 3 to 6 goals and become a pair similar to a pro pool, but with a slight variation. The pair plays together every game, but each game the pair is paired up with a different set of players.  The first 3 games you play the pairs change.  For example: pair 1 & 2 vs pair 3 & 4 then in the second game pair 1& 3 vs pair 2& 4. In the third game  pair 1 &4 vs pair 2&3, but you do not know the exact sequence as it is determined by a draw before the game. With the exception of the last game, you do not know your teammates. After 3 games all pairs have played each other and you total up the points. 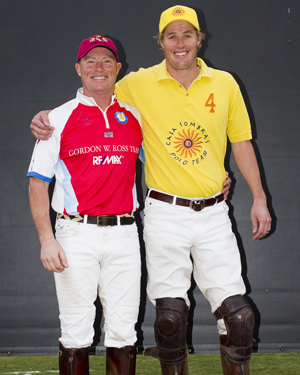 Total them up and 1st place plays with 4th place and 2nd place plays with 3rd place all on the handicap. It worked really well and the big advantage of this format is that it gives new people a chance to play better polo without a big financial commitment.  It is an opportunity for the new players to find out if they like the higher-goal polo. It also makes Pros use Patrons to help win and it helps to make connections with other players inexpensively, which it did.

Game 3:  Was all Atlant/Casa Sombres smoking Remax/Tentnology.   It ended with Atlant and Ashton Wolf winning 3 and 0 and the other 3 at 1 and 1 so we went to gross goals.

Remax had 35 points, Tentnology 32 and Casa Sombre 33. Casa Sombres was 3rd and joined Remax to play Atlant and Tentology and it was a really good game with a big crowd on a chilly day. Casa Sombres’ boy wonder, Conrad,  was replaced by a fine young man from Germany named Casper Crasman, a 2- goal German player. He did extremely well paired up with Patrick Uretz subbing for Fassetta and playing horses of Jack Ajluni, Shane Flock and Crowder.  He crushed the ball and had a big victory with help of MVP Gordon Ross of Calgary, who lit it up for two weeks. It was great game both weeks for the Sunday crowd which was huge on Opening Day. The bad luck was Ashton Wolf, who was Pro MVP, never lost a game until the finals, but that is what made this work.